From Dairy to Beef Cattle & Hay 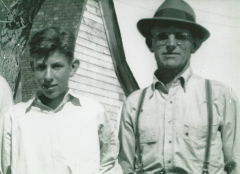 Elmer and his dad, Alfred

Established in 1922 by Alfred and Josephine Roberti, the ranch has grown from a small dairy to a nearly 6,000-acre cattle and hay operation. In 1952 the Robertis, along with their son Elmer, purchased thirty head of registered Angus cows from F.E. Bush in Cedarville, California. At that time the operation slowly began to phase out the dairy and headed toward becoming a beef ranch. The thirty cows mentioned above became the foundation of today’s herd, which is roughly 400 mother cows. 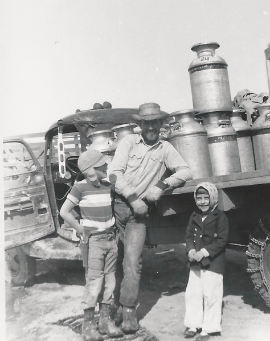 Up until the 1960’s the ranch produced enough forage for sixty dairy cows and a small beef herd.  Hay was grown on native meadows and dry-land grain was also harvested. There was not much time for fun and games in those days. Travel was harder and so were the winters. Entertainment included hunting and fishing, along with many Grange dances.﻿ 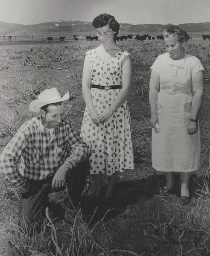 Elmer alongside his wife, Helen and mother, Josephine

The Robertis were some of the first farmers in the valley to start eradicating sagebrush. This picture on the right shows Elmer, Helen and Josephine examining dead sagebrush that had been sprayed in the previous year. Over time, some of the benefits of spraying brush were better pastures and more forage for livestock.